An April ruling by Hon. Mary Jo Heston of the U.S. Bankruptcy Court for the Western District of Washington in Tacoma addressed a fairly complicated and nuanced administrative expense request, ultimately adopting the view — contrary to at least two circuits — that substantial contribution claims are allowable in chapter 7 bankruptcy cases. In re Maust Transport Inc., Ch. 7 Case No. 14-40595 [Docket No. 167] (Bankr. W.D. Wash. April 3, 2018).

While not disputed among the parties, the factual posture of Maust was somewhat complicated. J.D. Logistics, Inc. (administrative claimant) was one of several creditors that commenced an involuntary case against the debtor under chapter 7 of the Bankruptcy Code. At the time, the debtor was subject to a state court receivership proceeding, the alleged purpose of which was to pay the debtor’s secured creditor Columbia State Bank (secured lender). The administrative claimant was represented by Nagler Law Group, P.S. as lead counsel and by Sheppard, Mullin, Richter & Hampton LLP, which had advised on filing the involuntary chapter 7. Two months into the chapter 7 case, the administrative claimant replaced Nagler with Shafer & Bailey (“S&B”).

The chapter 7 trustee filed a complaint against the secured lender (through his retained contingency fee counsel) based on the administrative claimant’s fraudulent-transfer theory, and the parties subsequently entered into a court-approved settlement whereby the secured lender would pay the debtor’s estate $200,000, approximately $70,000 of which went to the trustee’s contingency fee counsel.

Section 503(b)(3)(A) of the Bankruptcy Code permits recovery, as an administrative expense, of “the actual, necessary expenses, other than compensation and reimbursement specified in paragraph (4) of this subsection, incurred by … a creditor that files a petition under section 303 of this title….” Section 503(b)(4), in turn, permits administrative expenses for the “reasonable compensation for professional services rendered by an attorney … whose expense is allowable under subparagraph (A), (B) … of paragraph (3)….” The court found that § 503(b)(3)(A) “conclusively presumes that initiating an involuntary case is beneficial to creditors” and that, subject to a reasonableness analysis, legal fees incurred in doing so are not limited to preparing and filing the petition but can include “matters ‘directly related’” to doing so. These “directly related” matters include “‘contacting other creditors to join the petition, legal and factual research … [and] litigating whether an order for relief should be entered.’” The court ultimately allowed all of Nagler’s, Sheppard Mullin’s and B&S’s fees, to the extent the court could conclude they were “directly related” to the involuntary bankruptcy filing.[1]

Costs Related to Recovering Property of the Estate

Section 503(b)(3)(B) of the Bankruptcy Code permits recovery, as an administrative expense, of “the actual, necessary expenses, other than compensation and reimbursement specified in paragraph (4) of this subsection, incurred by … a creditor that recovers, after the court’s approval, for the benefit of the estate any property transferred or concealed by the debtor….” Because the administrative claimant did not (1) seek and obtain court approval to pursue the fraudulent transfer claim against the secured lender, or (2) actually recover the transfer (the chapter 7 trustee did), the court disallowed any request by the administrative claimant under § 503(b)(3)(B).

In answering the first question, the court rejected the analysis of numerous courts, including the Third Circuit Court of Appeals and the First Circuit Bankruptcy Appellate Panel, which had found that the statute’s omission of chapter 7 “create[s] the negative implication that such substantial contribution claims are not allowed in Chapter 7 cases.” Instead, the court — applying an analogous ruling by the Ninth Circuit Court of Appeals — found that the explicit reference to chapters 9 and 11 in the statute “is not restrictive, and absent a clear intention to disallow a type of expense, such expenses should rise or fall based on the facts of the case and other guiding caselaw.” In so doing, the court specifically rejected application of the doctrine of expressio unius est exclusio alterius, finding that § 503(b)’s prefatory use of the word “including” rendered the doctrine inapplicable to § 503(b)(3)(D).

The court found additional support from the Sixth Circuit Court of Appeals’s decision in In re Connolly N. Am. LLC,[2] reasoning that “an interpretation that limits the application of § 503(b)(3)(D) to only Chapters 9 and 11 negates the term ‘including’ that appears at the beginning of § 503(b)” and that “there is nothing in the Code specifically excluding such administrative claims in a Chapter 7.” And while the court specifically found that the language of the statute did not present a per se bar to a substantial-contribution claim in a chapter 7 bankruptcy case, it nonetheless concluded that “allowance of such claims will be rare and … should be limited to avoid overlap and duplication of efforts with those of the trustee….” Indeed, “[t]he Court takes an even stricter view of such [substantial-contribution] claims in a Chapter 7 Case, as a trustee is already appointed who has a statutory duty to investigate and pursue claims held by the estate where appropriate.”

In answering the second question, the court found that Maust was “one of those rare such cases” where a creditor has made a substantial contribution in a chapter 7 bankruptcy case. Key to the court’s determination were the administrative claimant’s (1) success in procuring contingency-fee counsel to pursue the fraudulent-transfer claim (when the chapter 7 trustee was unable to do so) and (2) expending resources to obtain documents and information that the chapter 7 trustee could not. Given the chapter 7 trustee’s reluctance or inability to convince a contingency-fee law firm to accept the representation and the trustee’s inability to finance the acquisition of the secured lender’s records, the court found that the administrative claimant’s willingness to do so “significantly benefitted the estate” and that “it is undisputed that [the settlement funds] would not have been available for distribution but for [the administrative claimant’s] actions.”

Finally, in determining the reasonableness of the administrative claimant’s fees and expenses, the court limited the allowance of the substantial-contribution claim to those fees and expenses directly related to procuring contingency-fee counsel and the costs related to copying records for the chapter 7 trustee’s benefit. By contrast, the administrative claimant’s “[f]ees incurred in investigating the underlying claims would not be allowed because of duplication of the Trustee’s role.”

[1] The court specifically disallowed certain fees and costs to the extent they were not clearly related to the involuntary bankruptcy filing. For example, certain of Nagler’s time entries were redacted in a manner that did not permit the court to determine whether such time was related to the involuntary bankruptcy filing or the receivership proceeding.

This article was originally published in the August 2018 edition of the Commercial Fraud Committee Newsletter. Participation in ABI's committees is one of the many benefits of becoming a member.  Committees provide networking and leadership opportunities.  For additional information on how you could become involved in ABI and our Committees please visit membership.abi.org. 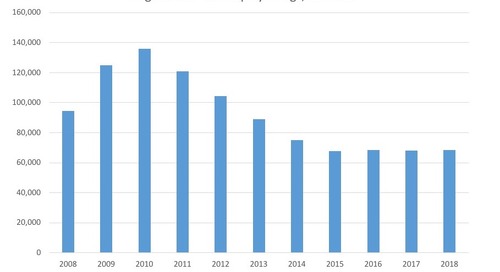 Total bankruptcy filings for August from 2008-18.

It isn't easy to discharge student loans in bankruptcy, but it isn't impossible either. (Part of a free boo...